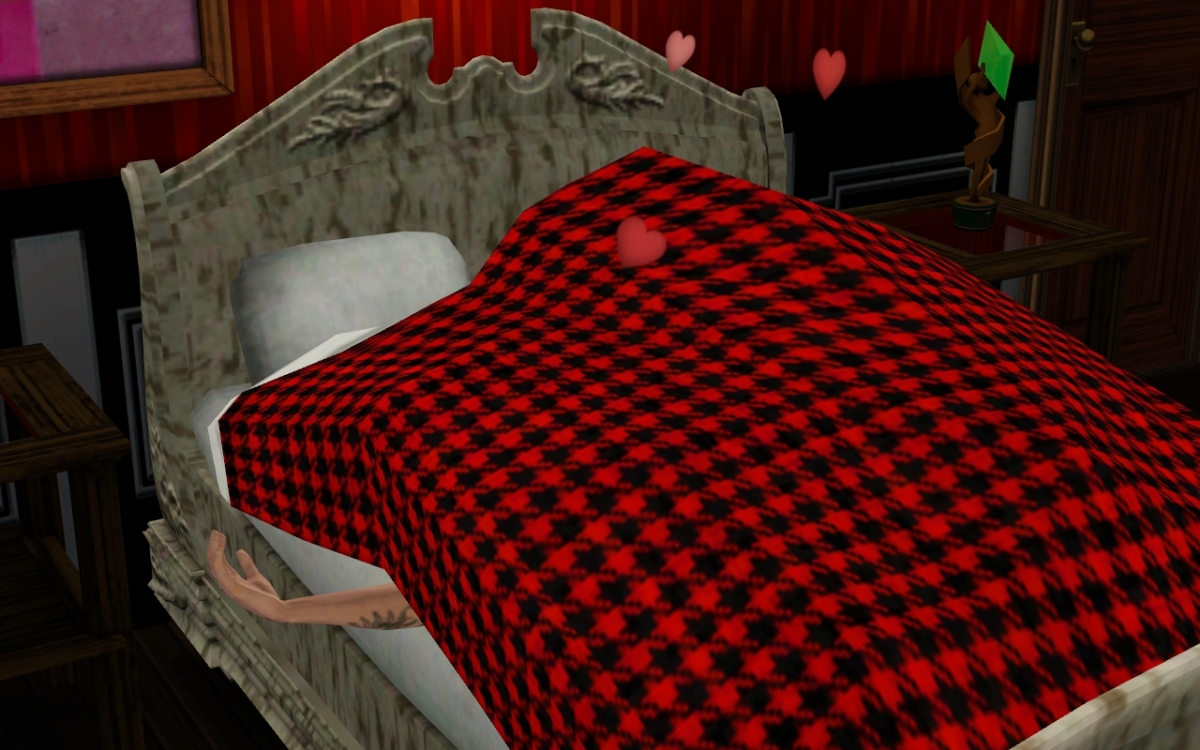 Welcome back to the Scatterday Matriarchy! I’m still going for silver in Boolprop’s SimNaWriMo event, and this is post #5! Will I make it to 7 posts by Halloween? Who knows! (Probably not… 😦 )

Last time Elaine aged into a teenager, Natalie hosted Elaine’s birthday party and later attended a party at Deangelo’s place, and Rowena aged into a toddler!

This time we’re kicking things off with some wonderful OLD PEOPLE WOOHOO! Unlike the mysterious shower Woohooers in the last chapter, I know this is Callie and Heimrich going at it because of the tattoos on Heimie’s arm. 😉

Sheesh Puzzle, old people Woohoo isn’t that bad! You’re going to be old one day yourself!

Aww, a rumour I know isn’t even remotely true! Elaine is too nice to be arrested! She just wants to go fishing and hang out!

“I even have a valid fishing license, and I’m planning on catching and releasing any fish I reel in!” 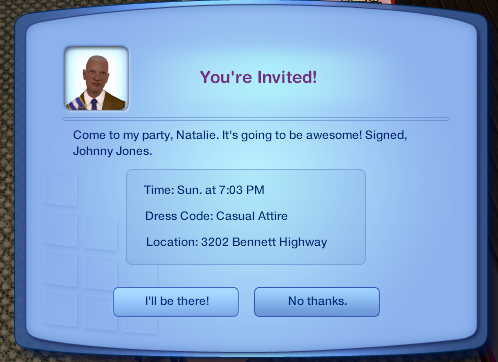 Natalie gets another party invitation too. She needs all of the socializing opportunities for her LTW, especially since she’s so close to the end. 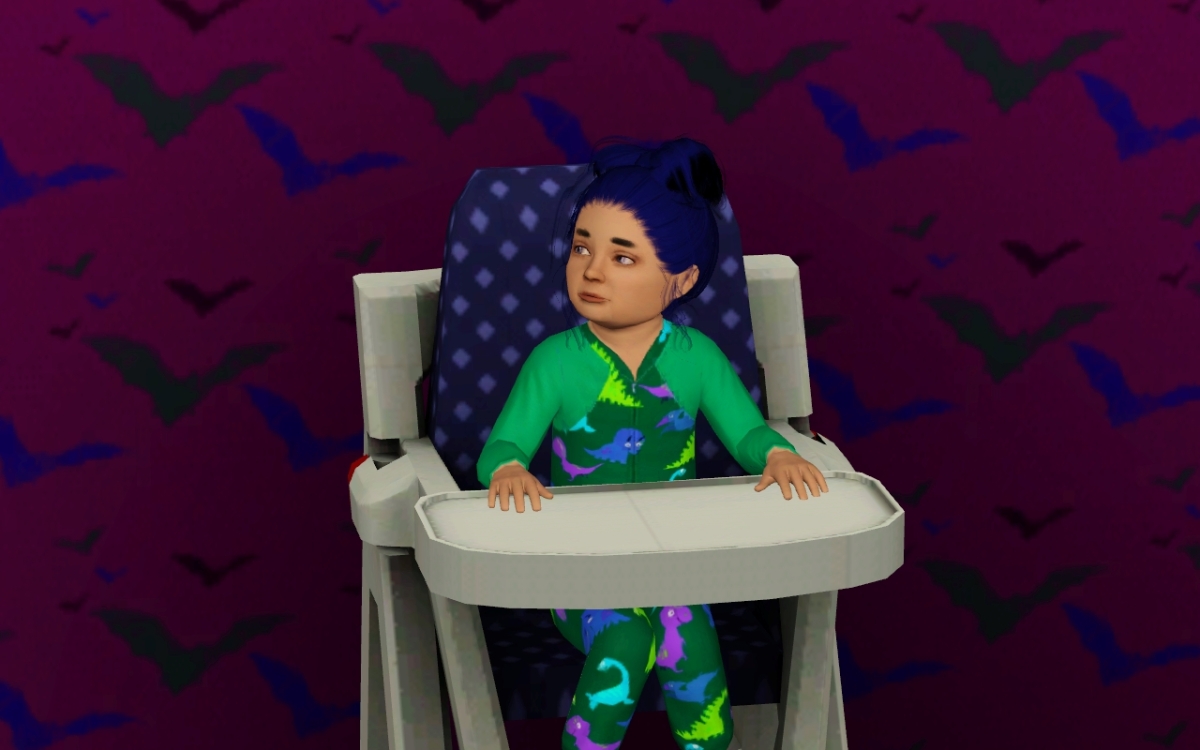 Well, Rowena has been a toddler for about four hours, and she’s already been abandoned in her high chair? 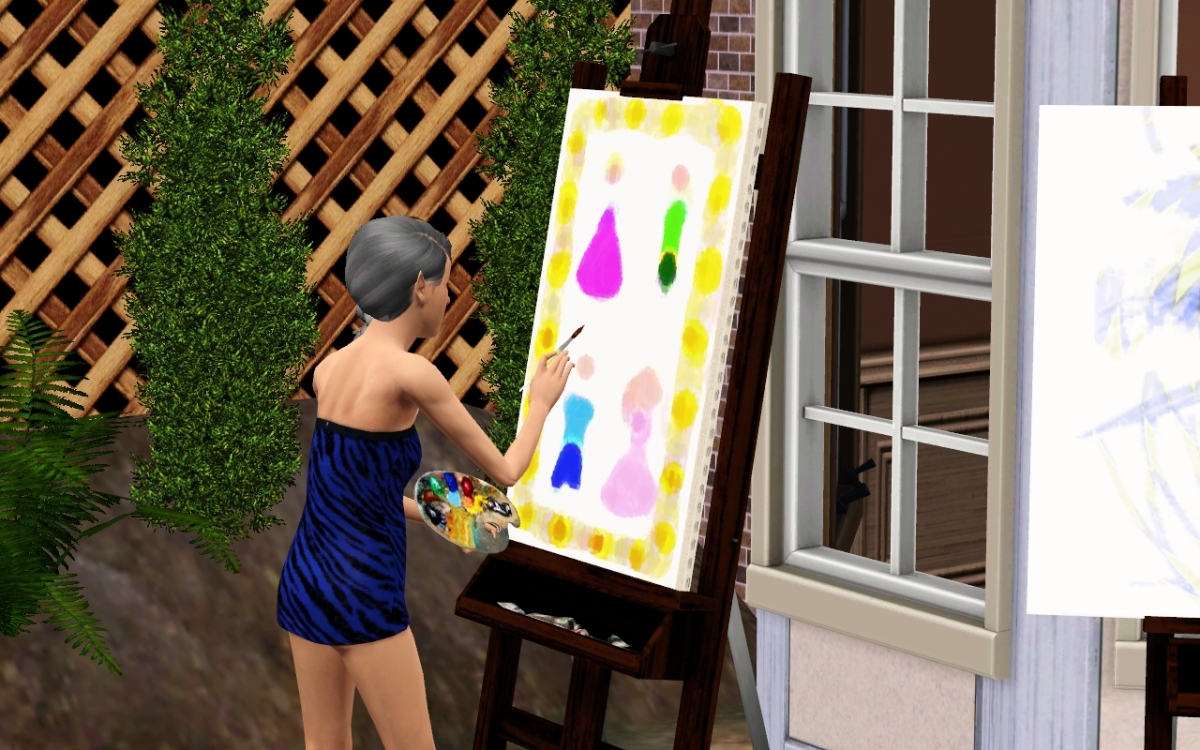 Clearly Callie is too busy painting blobs like a kindergartener to go feed her grandchild.

“Hey! This painting is at least at a grade two level!”

I felt bad for poor little Rowena, so I forced Natalie to care for her daughter. Clearly, she’s thrilled about it.

“Oh, toddlers will be the death of me!”

“Great, now I have a morbid toddler! What is Puzzle going to think?” 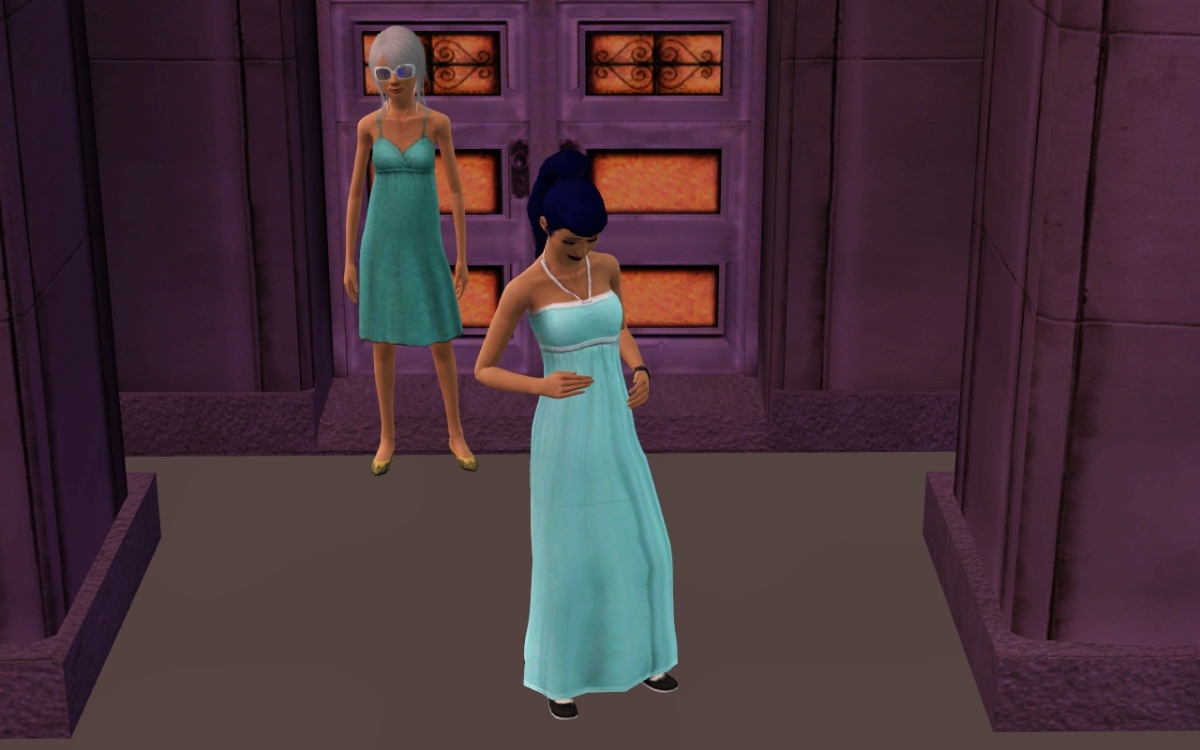 Well, looks like Natalie will have to put up with one more toddler, as Puzzle is pregnant again!

Yeah, I decided to go for her Have 5 Children wish. It reminded me of Ainsley, and if Puzzle has another girl then we’ll have a whopping FOUR options for the (eventual) heiress poll!

Natalie got fed up with toddler training, so I sent her over to Johnny Jones’ party….and nobody was there? Is this some sort of bizarre glitch with penthouses, where the host won’t show up to their own party? I only ask because it happened with Frankie in the last chapter too, but Frankie is very Insane and easily distracted, so who knows. 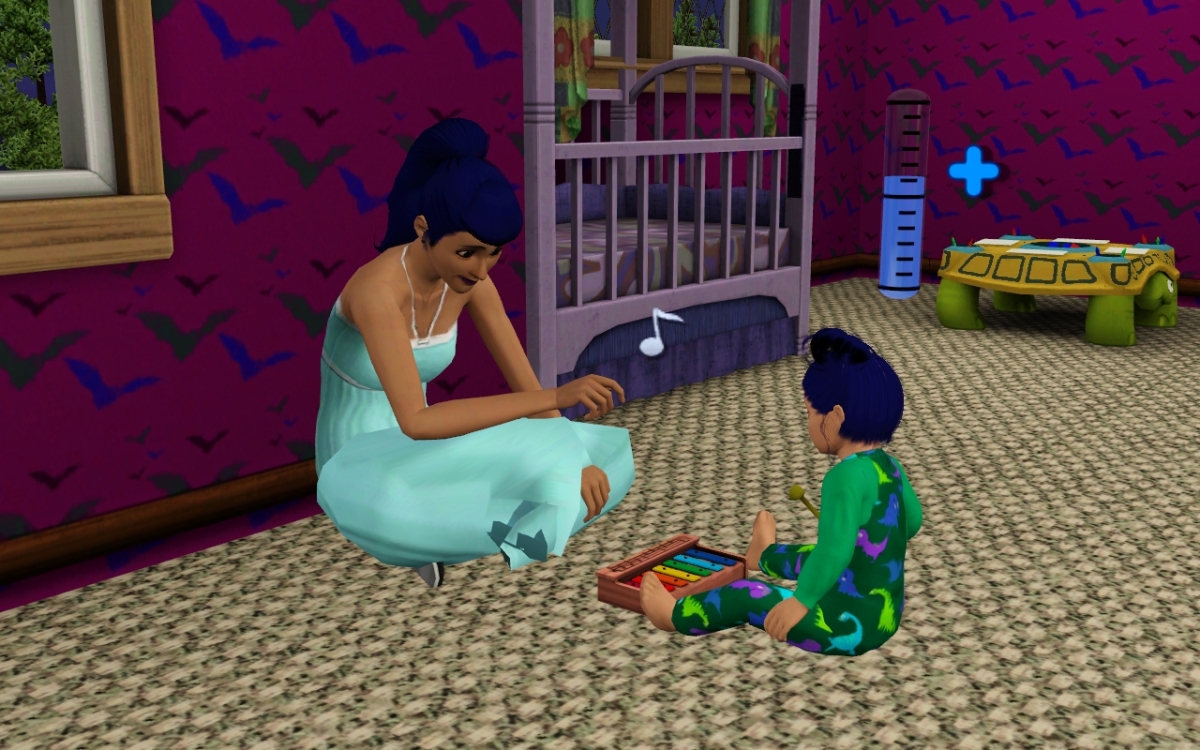 Luckily, Puzzle made it home and was gladly spending time with Rowena.

“You’re going to be a big sister! Can you hit the notes to make a song for the new baby?”

“What about blue, purple, and orange? Will the baby like that?”

Remember when I said that all Elaine wants to do is fish?

Yeah…she really likes fish, so much that she’s going to spend her entire life fishing, and the house will be covered in fish, and the family will only ever eat fish.

Heimrich’s been laying low over the past couple of days. I think the most interesting things he did were the previously documented Woohoo and…fixing the dishwasher.

“I’m retired. I don’t need to be interesting anymore.” 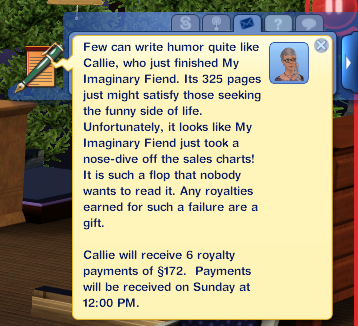 Callie is still interesting enough for both of them, though the world seemed less than interested in her novel about the voices in her head. I…I don’t think this was supposed to be a humour novel…

Callie seemed to get the message about her work, though.

“I’m calling it quits! I’m too old for this constant rejection!” 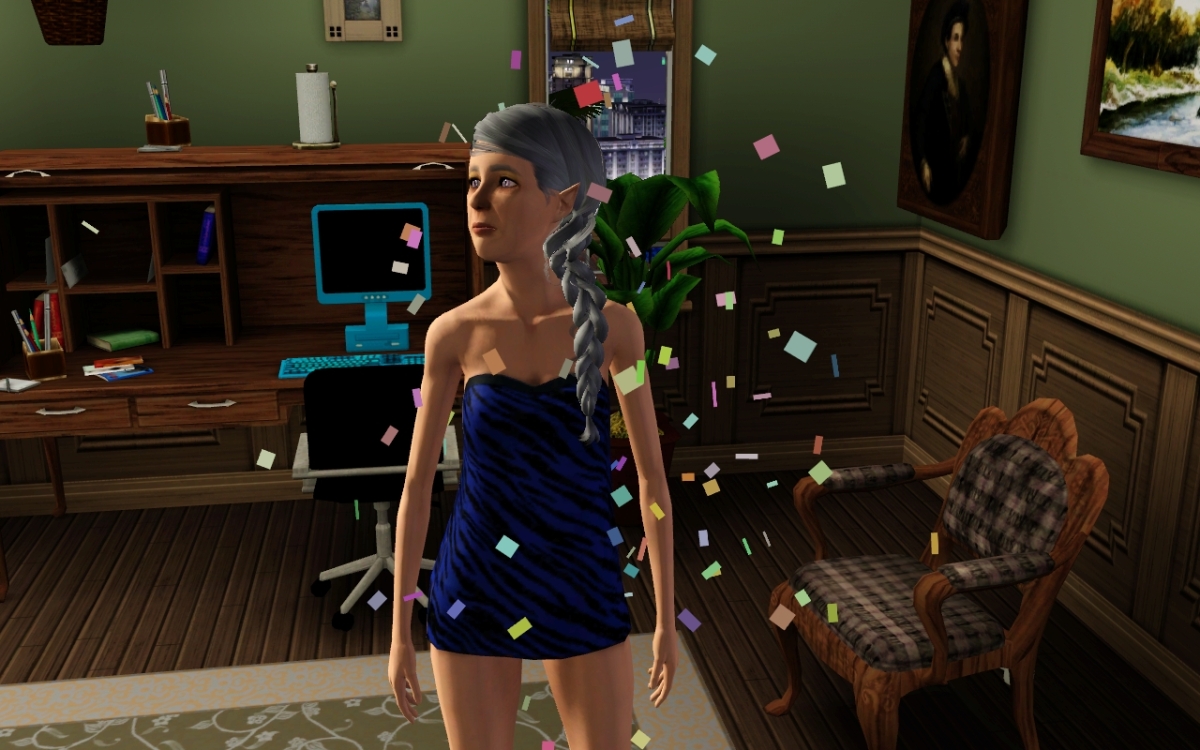 Like Heimrich was when he retired, Callie is thrilled.

And, like Heimrich, Callie only worked a handful of times a week, and her job performance meter was constantly in the red thanks to her terrible 3-star Celebrity rating. She also gets to retire to spare her the indignity of being fired. 😛

Callie will have plenty to keep herself occupied, though. I love when elders roll this wish for their adult children. 🙂

And Natalie wants another candidate for the heir poll, too! 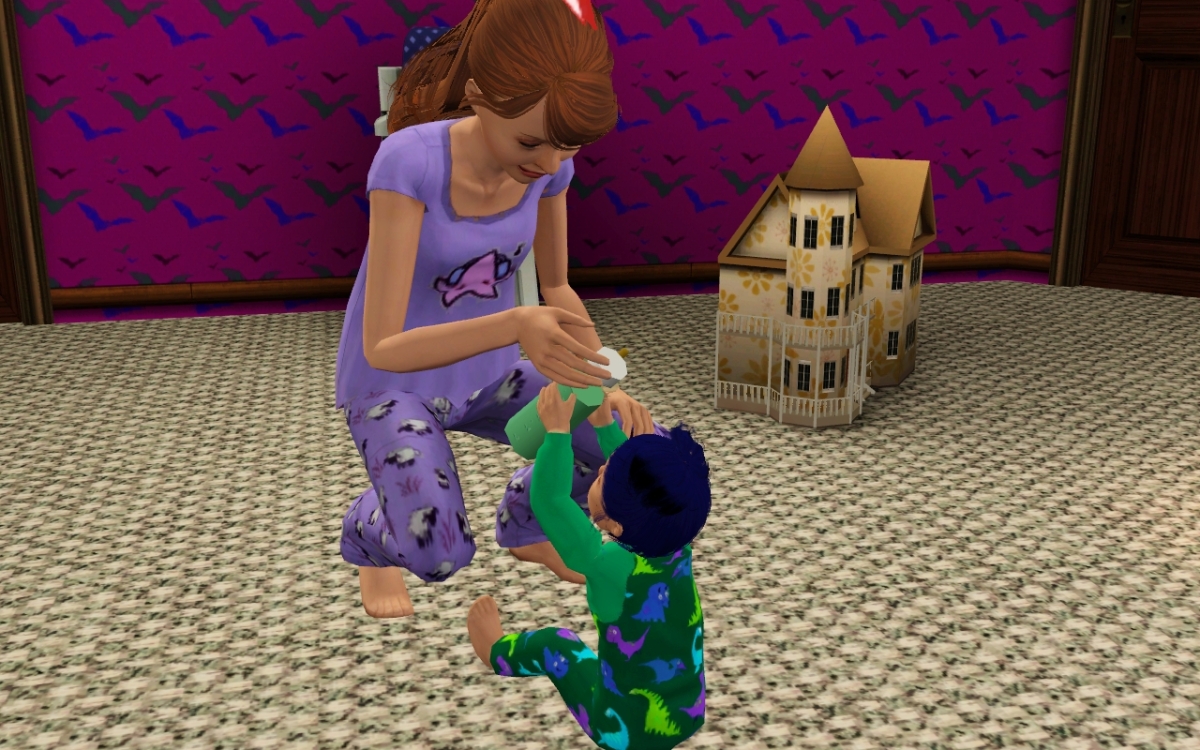 Like Hector, Elaine is also great with her younger siblings.

“There you go, Rowena, some nice warm milk. You finish that, and maybe we can play with your dollhouse later!” 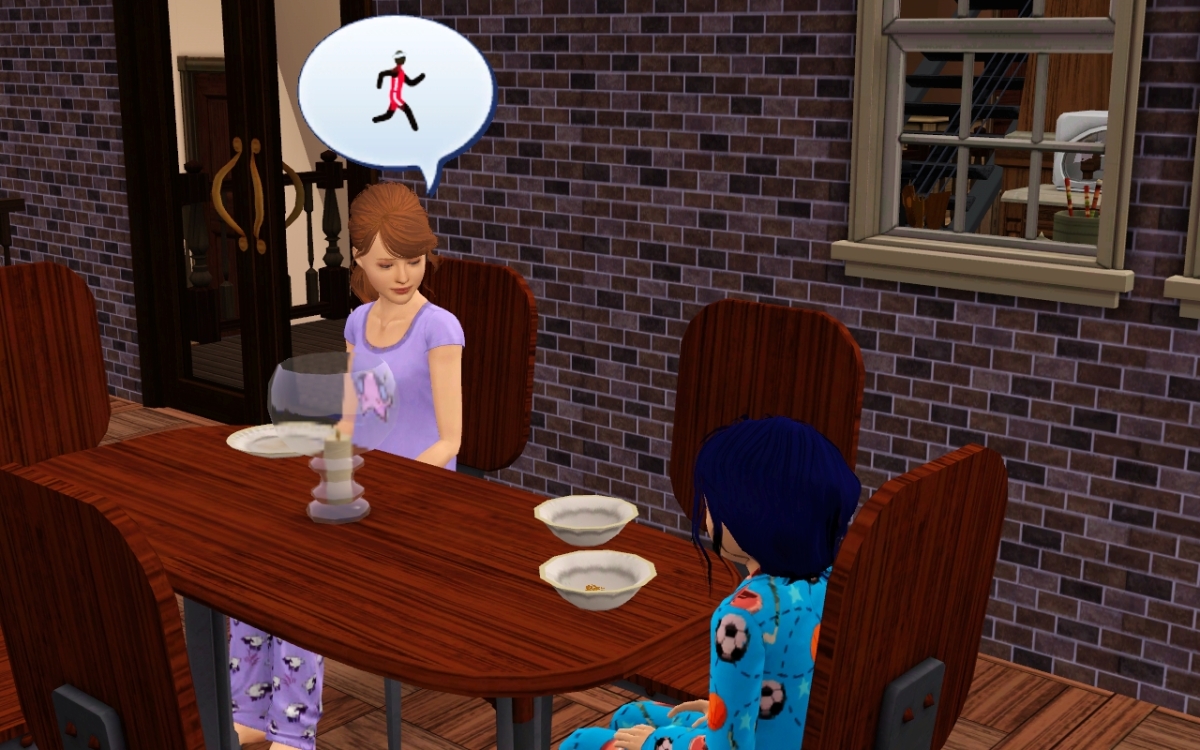 She even doles out life advice.

“Elaine, do you think I should try out for a sports team at school? I really want to play soccer.”

“Yeah, I think you should go for it! Being athletic is wonderful, and you can learn something even if you don’t make the team.”

“Just remember to stretch before and after practices.”

Despite being a teenager, I’m pretty sure she’s more of a parent than Nat. It’s well before noon, and she’s already hitting the bar.

“Ugh, I really need to get a better vodka than Simnoff. This is garbage!”

“Oh well, I guess I can still choke down a shot. WOOOOOOOOOOO!”

Even Callie and Heimrich are, uh, spreading the love.

“You still love me after all these years, Heimie?”

“Of course, sweetheart. I oughta get you out of this, uh, fancy dress right now.”

I think the papergirl is traumatized.

“I hate delivering to this house! Everyone is so weird.”

Bored of drinking alone, Natalie eventually wanders inside to find her wife, while Heimrich attempts to repair the dishwasher yet again.

“Nat, I’m pregnant, remember? And I’m making some grilled cheese right now, do you want one?”

“Uh…sure. Guess I’ll have to finish the Simnoff all by myself.”

“Nat, you’re drunk. I’m starting to worry about your partying. You know you’re a mom to four-and-a-half kids, right? I understand needing to go to parties for your Celebrity status thing, but do you think you can reign in it a little? I’d like to save some money on booze and court fees – five kids can be expensive, you know.”

“Aww, you just made me food so you can yell at me!”

“Alright, for you and the baby, I’ll try to keep it together a bit more.”

I feel kin of bad about joking about Natalie’s partying all the time. She really does love her family, but she is a Party Animal and Celebrity, so sometimes partying becomes more of a priority.

Clearly, poor Elaine needs to blow off some steam. Anyone up for some prom spam?

Twice the spam this time around, since both Hector and Elaine went to prom. And it looks like Hector is going to be getting it on with a creepy gaunt vampire girl? Wonderful.

Well, well, look who decided to make an appearance.

“OH MY GOSH HI DAD! You got my pedometer, right? I’m so glad to see you, oh I have so much to tell you about…”

“Uh, take this back and never speak to me again.”

Yeah…Heimrich got an opportunity to run around with a pedometer for his Athletic skill, and he had to turn in the results to Fake Hestia, of all Sims. This has been very awkward, and I hope we never see her again.

Ah, lovely, another thing that could have happened, given Callie’s propensity for Insane behaviour, but totally didn’t. Damn paparazzi.

For some reason, Elaine wants to tell Rowena all about prom?! I know you love your little sister, but there are some things toddlers just don’t get. 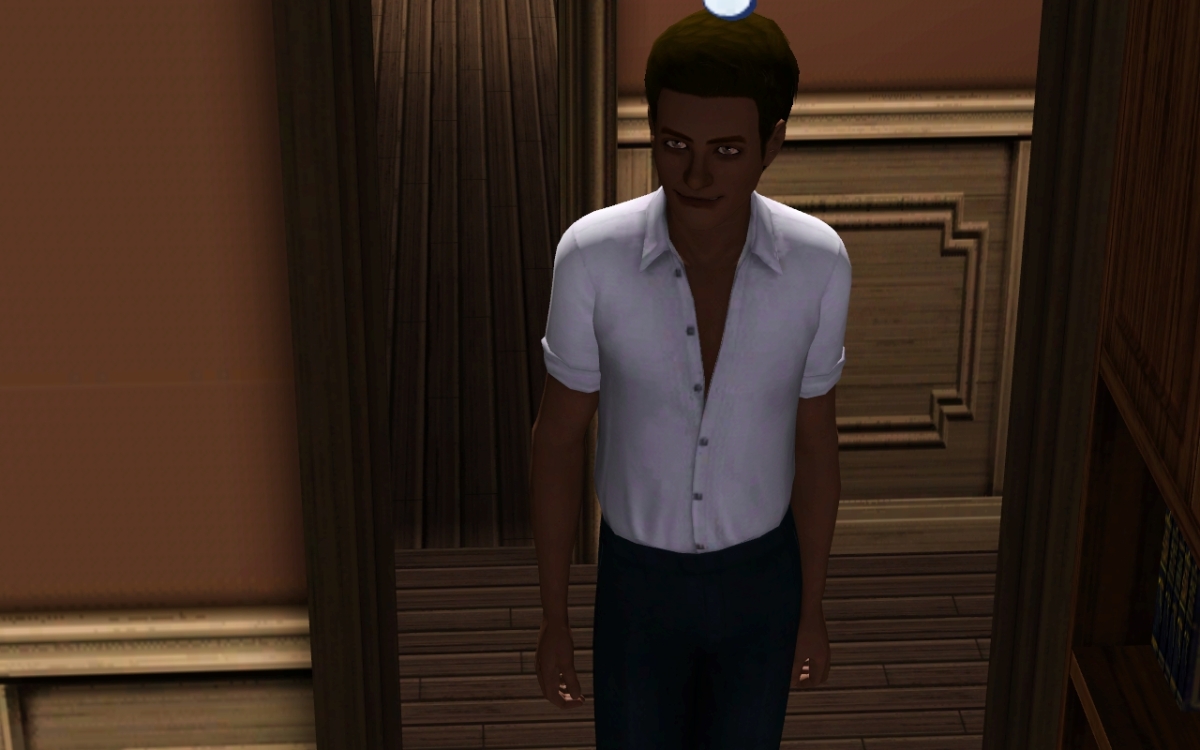 In other news, the family got a new maid! The old one must have retired after being traumatized by Heimrich’s wrinkly nudity. This man-maid is named Beau, and he is Face One and thus very cute, if a bit generic. How do I remember his name? 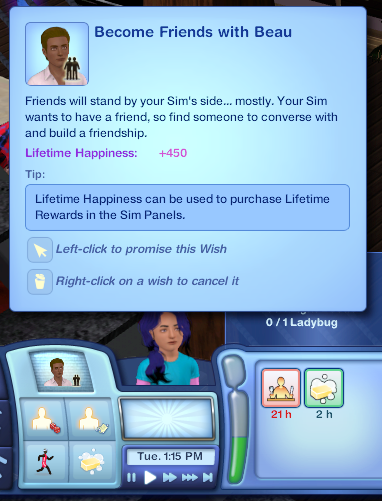 Because of THIS. No Mabel, the maid is not going to be friends with a small girl – that comes off as very creepy. I guess this is what happens when you have a Neurotic and Neat Sim. 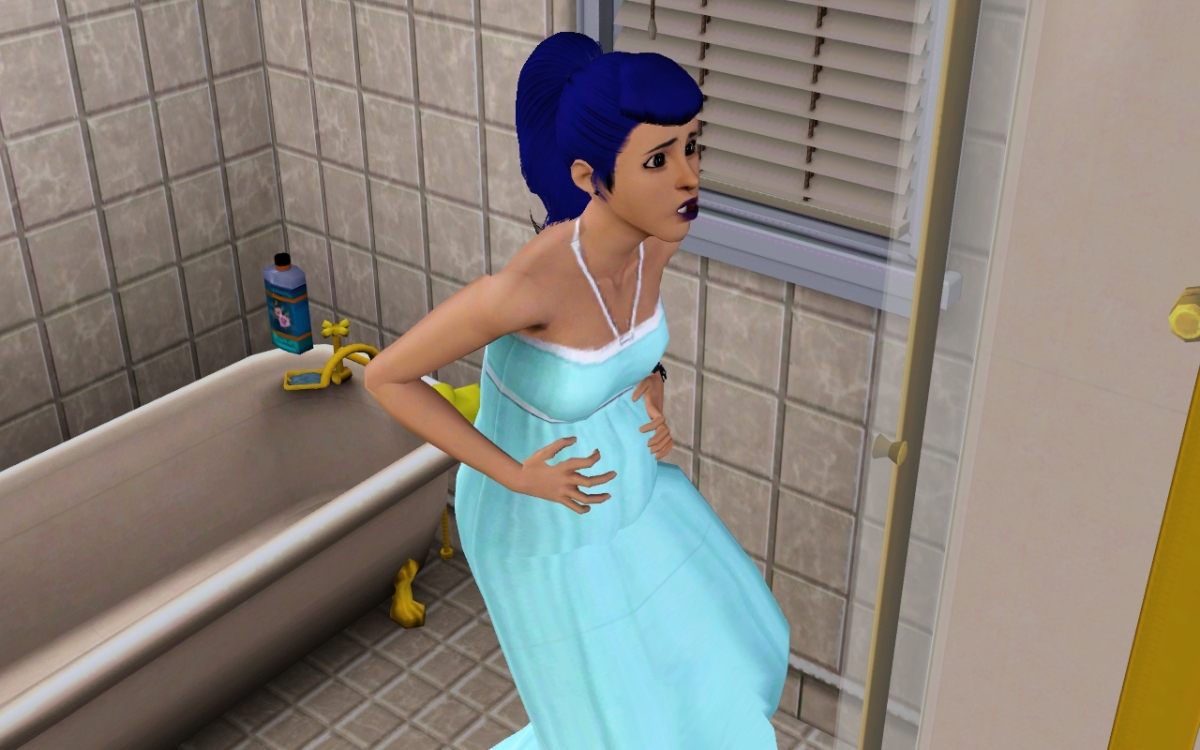 …then, suddenly, Puzzle goes into labour!

“WHAT IS THIS THING DOING TO MY INSIDES?! Mabel’s birth wasn’t nearly as bad!”

Puzzle opts for a homebirth this time around, mostly because I’m tired of my Sims schlepping all the way across Bridgeport to get to the hospital. WE DON’T HAVE TIME FOR THAT.

Luckily, the birth goes smoothly, and Puzzle welcomes the fifth and final child of this generation, another daughter named Isobel!

I actually took a screenshot of Isobel’s stats when she was born, something I forgot to do with the others. Isobel is an Athletic Genius. She likes Classical music, Peanut Butter and Jelly sandwiches, and the colour Spiceberry. Her Zodiac sign is Capricorn.

A few updates from around Bridgeport, then we’ll call it an update (so I can go on to crap out two more updates tonight hahahaha *sobs at my terrible time management skills*

Deangelo seems to be quiet the ladies man! Or maybe Matilda was into the pigtails, then dumped them when he changed back to a more masculine hairstyle.

Josie’s relationship is still terrible. I’m pretty sure I was right when I declared that this bullshit would last for the rest of her life!

That’s it for this chapter of the Scatterday Matriarchy! Thanks for reading, and happy Simming!